Through Artificial Intelligence, Segeati helps your organizations to reduce Non-critical Spend budget by as much as to 20%, which will be directly added to your profit.
Case Study

S ourcing and procurement organizations are under pressure like never before. Not only are they responsible for purchasing at a time of volatile commodity prices and supply market risks but, like other corporate functions, they are expected to do more with less funding for their operations. At the same time, along with other parts of the supply chain, they are being tasked with delivering business value through innovative, agile, and flexible operations. Amid these pressures,

most procurement organizations understand that one place where they may be leaving money on the table and deploying their resources inefficiently is in the low-value purchasing generally known as tail spend. Few understand, however, just how much money is involved, much less how to manage their tail spend so as to realize the potential savings and deliver other, more strategic forms of business value to the larger organization.

As we have noted, the most common approach to analyzing tail spend involves calculating ratios of spend to suppliers—many companies, indeed, simply classify as ―tail spend‖ all purchasing with vendors other than the 20percent with whom they have the highest spend.

At Segeati we go one step further and describe four segments of tail spend that we call the Hidden Tail, Head of the Tail, Middle of the Tail, and Tail of the Tail:

As we have noted, a company’s biggest suppliers are generally dealt with as part of ―strategically managed spend,‖ meaning that for these suppliers there are professionally negotiated contracts in place. As we have often observed in our client work, however, some spend with big suppliers is not covered by contracts—e.g., because existing contracts do not cover the specific materials/service being purchased, or simply because of ―noncompliant‖ purchasing. We call spend of this kind the Hidden Tail.

Head of the Tail

This segment contains spend that is not strategically managed, even though spend persupplier may be in the range of $50,000 to$1M per annum.

Middle of the Tail

Purchases in this segment of the tail, which includes a large number of suppliers, maybe in the range of $2,000—$200,000 per supplier. The Middle of the Tail is not strategically managed because the spend per Supplier is just too small.

Tail of the Tail

This segment of the tail contains suppliers with less than $2,000 spends. This spend is highly transactional and fragmented, involving many one-off purchases with a large number of suppliers. 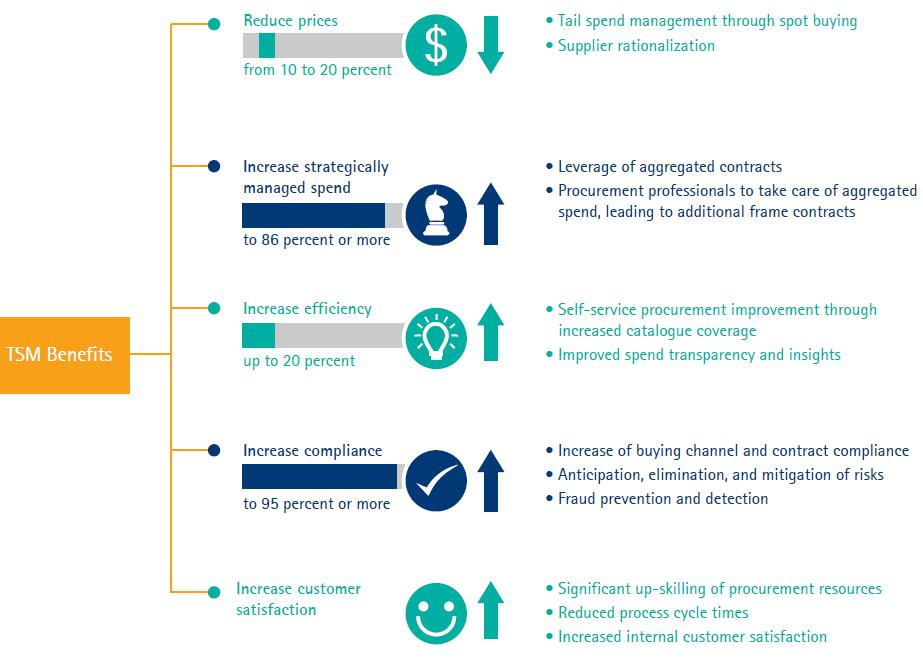